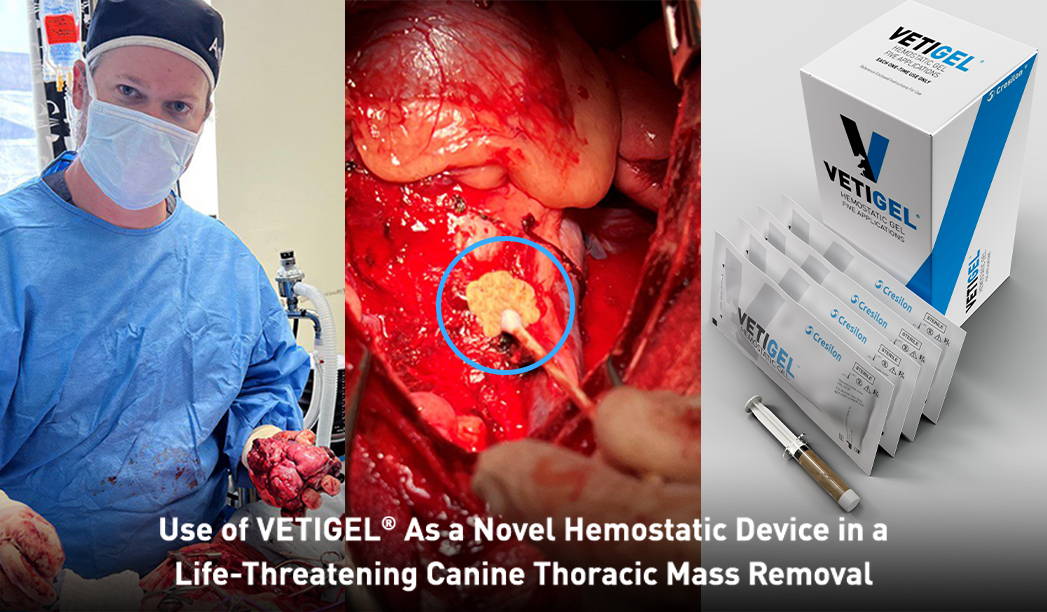 Thoracic mass removals are critical, highly sensitive routine veterinary surgical procedures, presenting unique and difficult challenges in the surgical theater. Proximity to core vasculature, respiratory organs, and severity of bleeding are all well-characterized risks associated with these types of procedures.

Dr. Matt Morgan, of Veterinary Emergency Referral Group (VERG) in Brooklyn, NY, recently encountered one of the “largest thoracic masses”. The dog experienced syncopal collapse episodes secondary to direct pressure of the cranial vena cava and brachiocephalic trunk and was brought into the ER immediately for surgery to assess and subsequently remove the mass.

“We had a bleed in the area of the cranial vena cava while removing the mass. I didn't have good visibility due the rapid bleeding and the mass being in the way”

Traditional methods of hemostasis were not able to stop the bleeding.

At this point, Dr. Morgan determined that the traditional standard of care would not be able to stop this bleed.

Dr. Morgan used VETIGEL, which instantly stopped the bleeding and saved the dog’s life. The bleeding was immediately staunched, saving Dr. Morgan precious time in the operating room and in turn, the need to use excess anesthesia. “I didn't have good visibility due to the rapid bleeding and the mass being in the way. I managed to get the syringe into the dog and the bleeding stopped shortly after” says Dr. Morgan.

In procedures where significant bleeding may pose a risk to the patient, blood transfusions are often needed to supplement blood loss. These can be costly, add operating room time, and are subject to the availability of blood, which is not always a guarantee.

Thanks to his use of VETIGEL, Dr. Morgan claimed that;

“VETIGEL Probably saved the dog from needing any RBC transfusions”

This benefit extends beyond thoracic mass procedures, and the use of VETIGEL has a wide array of implications for veterinary hemostasis at large.